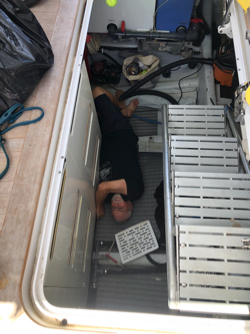 Posted at 17:15h in Blog, Hawaii by Don and Sharry 0 Comments
This has been an uneventful passage thus far. Uneventful is as good as it gets! The only glitch has been the leaking swimstep hatch which the manufacturer just adjusted the day before our departure. Obviously that didn’t work! They say they will come to Hawaii to make it right. Stay tuned.

The weather was calm enough for me to open the lazarette hatch and wash the salt out of the things that got drowned in the flooded swimstep. I’m not sure what the official definition of a lazarette is, but to me it is the most aft compartment of the boat , (not including the swimstep). I opened up the plugged limber hole that drains the Laz sump into the engine room. I had to lay down and reach under the battery boxes in order to reach the limber hole. I’ve considered adding one more sump pump in the Laz but decided to leave it so any water intrusion drains into the engine room sump. Then Engine room sump is set to alarm if anything over 1 litter accumulates. There are 4 pump systems just for the engine room.

For a couple of days we have been driving from the flybridge because we get a better vantage point for spotting garbage and also because it’s a delightful place to be for a downhill passage like this.

It’s been over 550nm since we have spotted another boat, which is just fine with us.

All of us on board are readers. Would you believe that not one video or movie has been turned on? The only screen time has been to look at the latest weather predictions from Predict Wind.

Last night the Stars were stunning and the Milky Way looked like a bright searchlight lighting the heavens. The wheelhouse doors were open and I was wondering if there was a way to convey to anyone who isn’t on board just how pleasant the sounds the waves make swishing down the hull. I just turned on my iPhone DB Meter Pro and with the wheelhouse doors closed the dB reading is around 45dB. With the doors opened and the waves talking, the dB readings are 65-75dB. You sailboat sailors don’t need this explanation.

This is why I have about a dozen “Life Is Good” tee shirts.