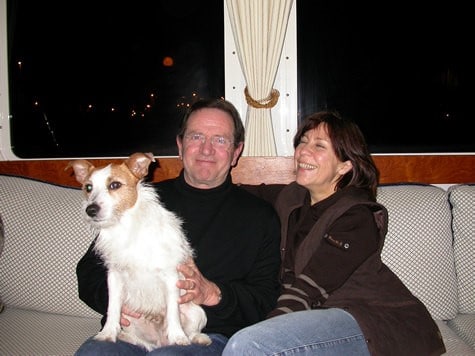 The World is divided into two kinds of people and I want to be completely honest with you. I am a “cat person”not a “dog person”, but Comme Vous is a sneaky little fellow. He clowned his way into my heart, and now I am completely smitten; J’adore Comme Vous.

The first week after we arrived in La Rochelle we met Comme Vous and son maitre, Jean Claude, on the docks in L’Ancien Bassin des Chalutiers, where STARR is moored. Jean Claude was advising a French-born American on the outfitting of his new catamaran for an Atlantic crossing to Florida. Don thought Jean Claude was an interesting fellow and we invited him over for an aperitif. Now he is our bon ami. Our friendship grew quite quickly as we discovered that we had many things in common and Jean Claude became our window into the hows and whys of French People and French Culture. While we are still a long way from being “experts” on the subject, most of what we know about France we have learned from Jean Claude.

Jean Claude is not your typical Frenchman. He is typical of most Europeans in that he speaks more than one language: French, English, and Spanish fluently and Arabic, Chinese, Urdu (Pakastani) and Tagalog (Philippine) less fluently. Unlike most Frenchmen, he has lived multiple lives. As a young man he worked for a large company selling electric equipment to airplane manufacturers in Europe and the US. Then for many years he lived in Saudi Arabia working as an independent contractor remodeling palaces.

Jean Claude is a sailor and has sailed his own boat into the Mediterranean Sea, and through the Suez Canal 3 times into the Red Sea. It was a natural progression, therefore, that when he returned to France he started his own company building a unique design of sailboat, using cutting edge technology. Two years ago he suffered a major setback in his life; he had a massive heart attack. He is now back on his feet working for friends as a computer consultant, specializing in MAC systems.

It is his avocation, however, that I especially enjoyed; Jean Claude is a cook extraordinaire It was not at all unusual for Don and I to go to le marche and buy something and when we got back to STARR we would realize that we didn’t know how to cook it. We would call Jean Claude and ask how do you cook duck breast, or pintade, or bar encased in sel from the Ile de Re. He would laugh and then tell us what we should do. He has taught me how to cook poule a pot and blanquette de veau as his mother and grandmother made them and he helped me shop for copper pots from Brittany. When we traveled to Paris he has recommended restaurants for specific kinds of food, such as cassoulet or wild game (in season). He also recommended restaurants for Chinese, which is his other “passion”: China and all things Chinese. He has traveled extensively in China and continues to study Chinese language. From the first days of getting to know him, he promised to teach me to make “Chinese ravioli” and finally we spent a Saturday shopping and cooking together. It was one of my best days in La Rochelle because we had to eat everything that we made for dinner that night.

Evelyne is Jean Claude’s wife and childhood sweetheart, and Comme Vous adores sa maitresse. He really belongs to her, heart, perky little ears, and soul. This is quite clear when she is in town. When Evelyne is home Comme Vous ignores everyone else. Comme Vous lives most of the time with Jean Claude, as Evelyne is very busy pursuing her career as a successful freelance medical journalist,traveling to medical conferences all over Europe. During the week she lives in at her apartment in Paris, instead of at their home in St. Martin de Re. Before she returns home, Comme Vous becomes very excited. Then when Jean Claude picks her up at the Garre de La Rochelle, Comme Vous becomes a “Velcro dog”, firmly attached to her side. When she leaves again on the TGV to Paris, Comme Vous pouts for days and will have nothing to do with poor Jean Claude.

It took time and lots of patience, but now Comme Vous treats me a little more like family. He will sit in my lap (briefly) and he lets me play the “chew stick” game when we are riding in the car (he grabs his little chewstick and if I hold it he will chew on it until he becomes bored). Otherwise, he tosses it on the floor; he can’t be bothered with such a trivial item. Jean Claude tells me that I am very “privileged”, because he only plays this game with Evelyne. Comme Vous has traveled with us on STARR to Rochefort for a weekend and has been on board for dinner countless times. STARR is now like his second home and we are his adopted family. We are very fortunate indeed that he deems us worthy of his friendship.