Cleaning Up the Mess 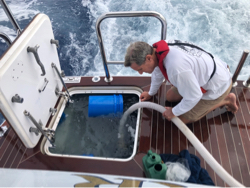 24 Aug Cleaning Up the Mess

Posted at 13:15h in Blog, Hawaii by Don and Sharry 0 Comments
This is Noodle’s 24 August blog post:

Yesterday morning at 11AM we passed our first bit of floating debris. I couldn’t tell what it was, but it looked like plastic. Sharry and I saw another, a piece of styrofoam, this morning as I was typing this. Nothing else sighted. We also haven’t seen any ships in a couple of days. At some point we will be crossing the California – Asia shipping lanes so we are remaining vigilant.

The seas were flat calm and the winds were light during the morning. The swim step was damp, but seas were not washing over it anymore so we decided the time was ripe to open it up for a look see. It was full of water and everything stored there was sloshing around.

We got out Starr’s emergency diesel pump, which is stored on the upper dinghy deck, set it up, and started pumping out the swim step. After clearing 80% of the water we stopped, pulled out all the gear stored in there, and attempted to pump out the remaining 20% of water. The diesel ran fine but the pump wouldn’t suck water. We tried new hose gaskets, moving the pump down to the main deck, and switching suction hoses. Nothing worked. After an hour of screwing around, Don took the pump apart to discover that the impeller had decided that this was a good time to disintegrate.

Clay got the last of the water out with a bucket and cleaned out the remaining muck that was clogging the swim step bilge pump. Donna was washing all of the stuff that came out of the swim step while Don and I were messing with the diesel pump.

Once the swim step was clean and empty, we tried to determine how the water was getting into it. Clay lay on his back below the shut hatches while Don and I poured buckets of water on it. Clay should have worn a snorkel – both hatches leaked significantly in two places. Don also lay on his back in the swim step with both hatches shut, and he could see light coming in through the seals. It’s fair to say that the skipper is less than pleased with the workmanship in replacing and adjusting the swim step hatch seals last week.

We put the gear that wouldn’t be affected by flooding back into the swim step and shut the hatches. We are hoping it stays calm enough for the swim step deck to dry. If it does dry, we can seal it closed with duct tape. We found places for the rest of the gear on the upper deck and in the lazarette.

Four hours later everything was put away and we were back to reading and listening to podcasts. I hope we don’t need that diesel pump for the rest of the crossing.”