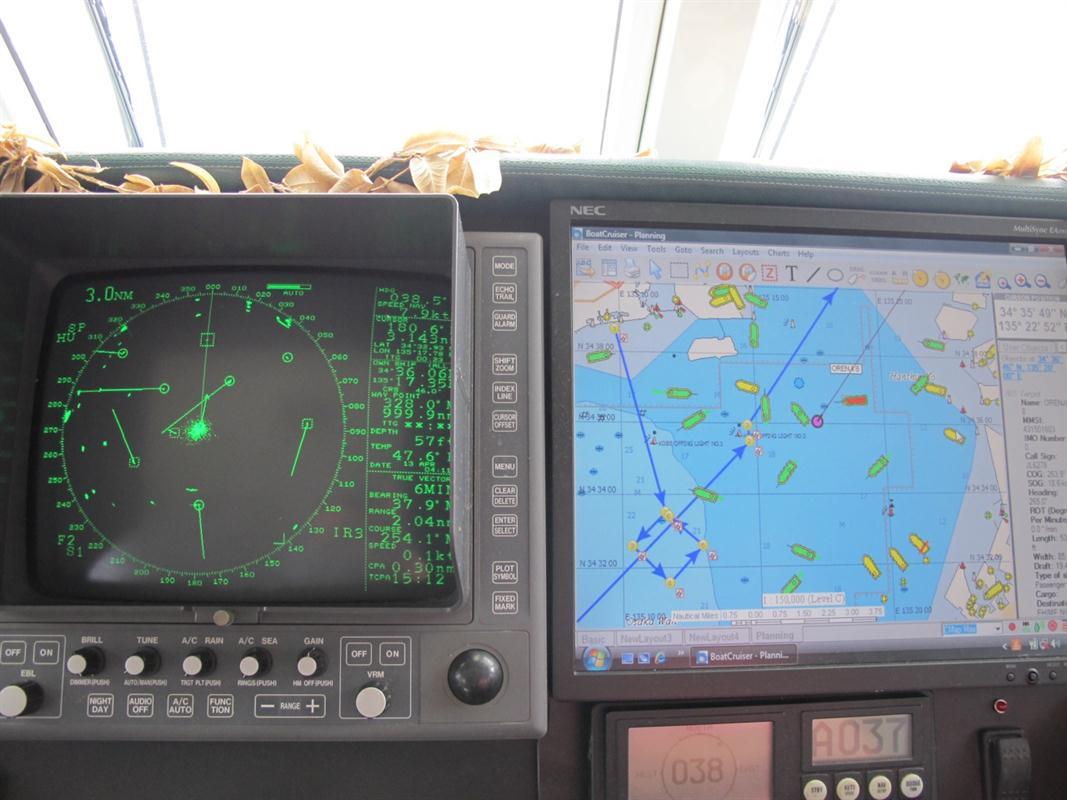 Posted at 00:00h in Blog, Japan by Don and Sharry 2 Comments
Bellport Ashiya

Heavy commercial traffic became a big issue once we approached mainland Japan. Entering Osaka Wan (Osaka Sound) we would often have more than 30 boats with AIS on our navigation screen within a 12 nm range; and that didn’t take into account other vessels, such as fishing boats, that didn’t have AIS. (AIS is a ship tracing system). Other navigation issues were fishing buoys for nets and long lines, and fog and rain.

We very carefully approached Bellport Ashiya, arriving on Tuesday, April 20 at 1400 local time. Our friends on the Nordhavens Sans Souci, Seabird and Grey Pearl, the GSSR GROUP welcomed us. After hugs all around, Ken and Roberta Williams (and of coarse Shelby), Steven and Carol Argosy and Braun and Tina Jones all joined Don and I and our friends/crew, Tad and Joyce Lhamon, in the salon of Starr for a celebratory glass of champagne. It was very “unreal”; It has taken me most of this first week for my mind to catch up and believe that we had arrived at our final destination.

While we had cleared into Japan in Chichijima, we had also stopped at Egata Fishing Harbor in Tanabe, and Suntopia Marina at Sumoto on the way to Ashiya. All of these ports are considered “closed ports” to foreign vessels; in fact, the customs officials in Chichijima told us that we could not allow any people to come on board Starr because it was “officially” still a part of the United States in Japan. We stopped in these ports because of some minor mechanical difficulties and also because we did not want to attempt to navigate the crowded traffic lanes at night; after such a long voyage, we felt that this was a serious safety issue. In order to enter each “closed” port, it was necessary for us have our ship’s agent, Furuno san, obtain permission for us to stop, and at each port we were met by the Japan Coast Guard. Furuno san advised us to “import” Starr into Japan. He sent us the following email:

during your stay in Japan. Then re-arrange qualification at last port before you leave Japan.

After you obtained the permit, You can visit domestic ports freely same as Japanese domestic ships

without appointment of agent. Otherwise you have to appoint ships agent at every calling port as

“Foreign flag vessel” If you confirm OK, will advise approx cost for procedures at Ashiya.

So, on Wednesday morning a “flock” of officials descended onto Starr. We met with Quarantine and (they took away our citrus, potatoes, ginger, and apples), Customs and the Japanese Coast Guard. After two hours of filling out paperwork, we were finished. We are now a Japanese vessel and can cruise freely throughout Japanese waters.

Both Don and I were very tired after our arrival in Ashiya. We had spent so much time working toward our goal of reaching Japan before the Typhoon season started (April –December), and had been moving “fast teack” after leaving Hawaii at the end on January 29. We had traveled 8999nm since leaving Seattle on August 15, 2009: We left Pohnpei in the Federated States of Micronesia on March 25 and arrived in Guam on March 30 (920nm); we left Guarm on April 3 and arrived in Chichijima on April 7 (849nm); we left Chichijima on April 8 and arrived in Ashiya on April 13 (628nm).

I think that even more than the distance traveled, there is both an excitement and a letdown upon finished a major voyage. After the Japanese officials left, we felt as if we had “hit a wall”. Feeling tired hasn’t kept us from doing things, however. Don has replaced the hydraulic ram on the port stabilizer, pulled apart the starboard stabilizer and found that the trunion bearing needs to be replaced, put a new pump head on the 24 volt transfer pump, replaced the oil-sending unit on the forward generator and today we fueled (6022 liters of diesel).

We went out for an Itailian dinner in Kobe our first night here with all of our GSSR buddies; went to the Earthquake Museum on Thursday (commemorating the 1995 Great Kobe Earthquake) with Ken and Roberta and Steven and Carol; and to the home of a new Japanese friend on Sunday night for a BBQ. Tomorrow Carol and I go to get haircuts (a new cultural experience for me), and Thursday Don and I will go to Kyoto for the day with Braun and Tina and their friends visiting from Washington DC. I am going to try to secure reservations for accommodations for just before New Year; I want to hear the temple bells of Kyoto on New Year’s Eve.

I almost forgot to mention that on Sunday afternoon we participated in the” Blessing of the Fleet” here at Bellport Ashiya Marina. A Shinto Priest blessed the boats of various members of the Ashiya Members Club and each of our American (now Japanese) boats as well.

On the Monday after the “Blessing” we received this email from the Private Membership Club of the Bellport Marina:

say many thanks for participate to blessing of the fleet by shrine.

I think you & members of all american boats owner & family were

very surprised to take an experience of japanese style blessing.

So, four american boats can do safety sailing within 20miles from

However over the 20 miles, No effect & reach to pray to the God of sea.

Pls try to safely sailing over 20 miles by own your risk.

We members of Bellport intend to provide any support & help to you.

Pls contact us in anytime when you need help.

Again, We deeply hope you to have safety & joyfull sailing untill

Japan is Wonderful. We have so much to learn from these amazing people.