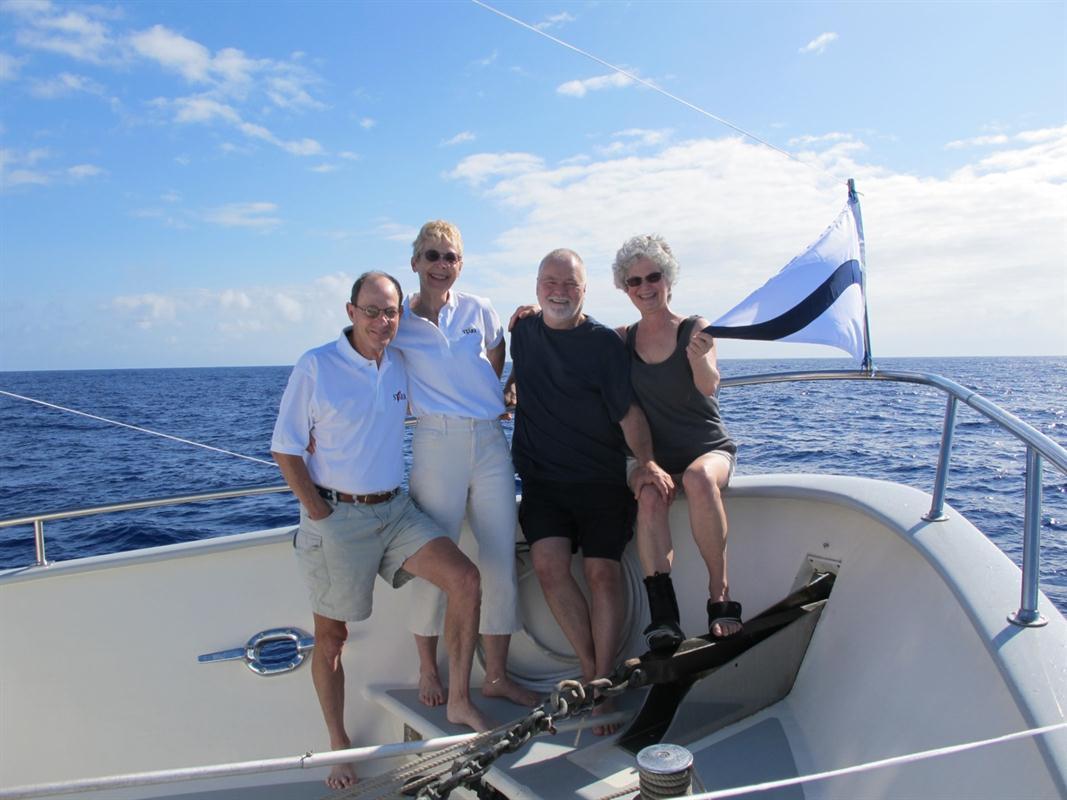 The CCA was well represented at the International Date Line

On February 19, 2011 Jean and I received an email from Don and Sharry on the M/V Starr to be crew on their voyage from Osaka, Japan to Honolulu. After about five minutes of discussion we decided this was a chance of a lifetime; a dream come true. We had covered many thousands of miles far and wide on our sailboat, Ghost Fox, and our trawler, Daisy over the thirteen years we cruised full time. However we had never made it to the Western Pacific. We have known Don and Sharry through the Cruising Club of America and have had many great times with them and knew that a month aboard Starr would be very pleasurable. One of Don’s first questions was how is our health? Jean and I felt we were in good shape for our age, me bicycling a 100 miles plus a week and Jean doing her energetic exercise class three times a week plus a three mile daily walk. One thing we learned on this trip is there is a great deal of difference between the serenity of sailing down wind on a sailboat than beating to weather for four thousand miles.

Starr is beautiful vessel that was designed as a passage maker. The Cummings ran at soothing 1300 and 1500 RPM. The transmission has a 4.5 to 1 reduction gear than turned a five-blade 50” propeller that was powerful and quiet. The engine noise level in the pilothouse was almost unnoticeable. Four separate staterooms and heads provide a place for private time or to catch up on sleep. We did three-hour watches that worked out very nicely. Ever successful cruise consists of a great crew. All our personalities got along great. We had good conversations, great laughs and were serious when needed. After 24 days of cruising we arrived in Honolulu and all six of us are still good friends.

Our meals were wonderful; Sharry did a great job in provisioning and making menus for six people for a month. She and Jean had a fun time in the galley preparing the dinner every night, even if we were rocking and rolling. During the dinner preparation, the guys were in the pilothouse telling their sea stories. We all fixed our own breakfast and lunches but dinners were in the pilothouse so we all could eat together; that was a special time for all of us. Then Sharry and Jean got to relax and Gary and Viktor did the dishes. It was all very organized.

Thanks Sharry and Don for giving us the chance to live one of our dreams to cross an ocean!