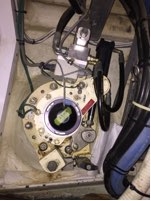 Posted at 17:14h in About MV Starr, Blog, Hawaii by Don and Sharry 0 Comments
It was relatively pleasant even after we got out of the lee of Oahu yesterday, but as the afternoon wore on the winds and seas increased until it was pretty uncomfortable aboard Starr. The winds are up near 20 knots now, as forecast, but it is the seas that are bothersome. We are headed north, and there is a moderate swell form the north east, no doubt the remnant of wind from that direction a couple of days ago. There is also a swell from the east that matches the current wind direction. These swells combine to make a confused sea that has Starr pitching and heaving.

Our stabilizers (picture of control system inside boat is attached) control the rolling. There are two large blades sticking out of Starr’s hull amidships that turn to prevent the boat from rolling in the large seas. These blades use the vessel’s movement through the water to create force to stop the rolling. As the boat starts to roll to port, the port side stabilizer turns to try to lift the port side of the boat. The starboard stabilizer turns to pull the starboard side of the boat down. The opposite happens when she tries to roll to starboard. These stabilizers are computer controlled and use hydraulic power from the main engine to operate. It is a complex system, but when it works Starr hardly rolls at all, even in these large beam on seas.

Unfortunately, the stabilizer system started acting up last night. It was chattering as the hydraulic rams operated to turn the blades. We were concerned that it would.get worse and damage the system so we shut down the port stabilizer, which was chattering the most, and ran using just the starboard stabilizer. Not as comfortable, but better than nothing. This morning Don got on the sat phone with his stabilizer guru in Seattle to trouble shoot the problem. We are confident that there is nothing wrong with the hydraulics, and think it is a computer issue. Don made some adjustments to system sensitivity which seem to help. The port stabilizer is back on line and the rolling is controlled for now.

All of us aboard are uncomfortable in this seaway. None of us have been to sea for a few months, and after being on dry land for awhile it almost always takes a couple of days to get our sea legs. There’s not a lot of eating going on, but I’m sure that will change as we get more comfortable with this motion.

The most comfortable position is horizontal, so most of us are lying down when we aren’t on watch or having to do something else.

We are about 200 miles north of Oahu now. You can see where we are anytime using this link http://forecast.predictwind.com/tracking/display/Starr. The same link is on the top menu bar on the mvstarr.com web page.